“I’m very happy to present you with this album which is my labour of lockdown love. With no work and no band members for a year I put on a brave face and learned how to sound engineer and play a few more instruments. And I wrote, wrote, and wrote. “The Birdcage Sessions” idea was about new songs being set free like little birds, reminding, embodying and promising the feeling of freedom again. They inevitably expressed my take on the crazy world of 2020-21. The murder of George Floyd and the BLM awakening had a big impact on many of us. “Birdcage Blues” is in part a response to that and stands in solidarity with that struggle. Some songs began as tributes to guitar stylists from the Afro-American legacy who I have long studied (Charlie Patton, Son House, Robert Belfour and Fred McDowell in particular) and some started with poems, for example thoughts from looking up through my skylight window. Many deal with our relationship to nature in this year when this all went so horribly wrong. The English songwriting tradition was buried under a factory in this cradle of capitalism, so many of my generation grew up looking across the Atlantic for inspiration. As well as the Afro-American music forms that I have been studying in detail since I was 15, the Folk boom of the 1960s joined the Beatles/Classic Rock era influences of my peers. Lyrically, Porter/Gershwin/Rodgers/Louis Jordan/ Dylan and Cohen are among the bigger waves in the sea of influences on my own songwriting. The only cover on this album,“Amazing Grace” I played at my best friend’s funeral and I included it to give a moment to remember those we lost this last year. Of course for thousands of years, songsters and musicians helped us celebrate and dance; express joy and love; rise above grief, loss, loneliness and hardship; and sometimes just told the news or shouted out injustice. The tracks here, as on all my albums, are in that tradition. My son Xavi played cello on 3 tracks but all the rest is me alone in the home studio. Incidentally I also started painting and the cd art is mine this time too. So from this topsy-turvy year I have made a new album of songs which I am ready to set free from the Birdcage. I hope they find ways to sing out to you”. 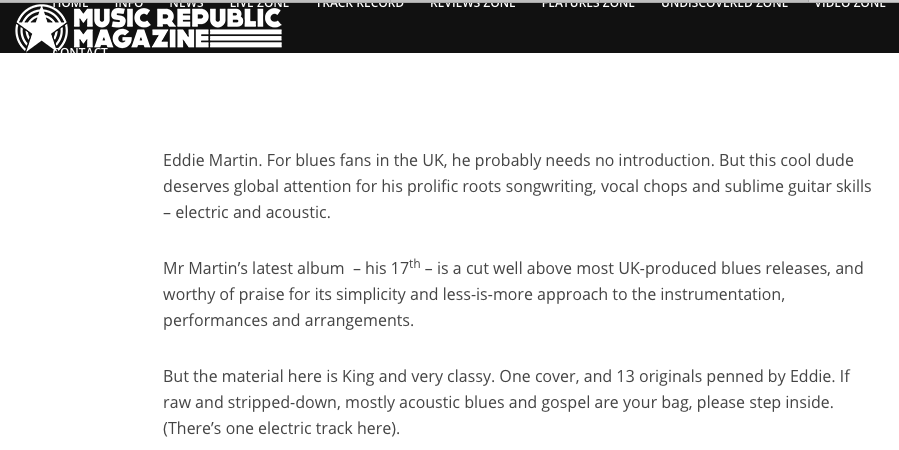 “Bristol-based Eddie is always worth a listen, whether he is leading a big R’n’B band, taking inspiration from late 60s blues-rockers, or working as a one-man band. This set was recorded in lockdown – the subject of the title track, of course – and falls more into the acoustic Eddie category with the leader on primarily guitar and harmonica, and Eddie’s sons adding subtle textures. Most tracks here draw some inspiration from vintage Mississippi sounds (try ‘Breakeven Blues’), with very occasional detours into a personal singer/ songwriter material – lend an ear to ‘Skylight’. But then try ‘Too Much Choice Blues’ for a fine upbeat (and nicely barbed), highly rhythmic blues performance. Eddie’s on a winner here again; he’s not copying, even if once or twice he brought Doctor Ross or Juke Boy Bonner to mind. Check him out.”

If anyone knows how to play the blues it’s Eddie Martin; over thirty years and eighteen albums, he’s one of the finest guitarists around. This latest release of fourteen brand new songs is a rich tapestry on which Eddie has woven his songs and this time it’s not just guitar he’s brought to the sessions; the acoustic and the electric are there but joined by lap steel, harmonica, foot percussion, bass, piano, organ, accordian,mandolin, banjitar and, on cello his son Xavi brings a rich depth to three tracks.

Things set off nicely with a song inspired by Son House and Mississippi Fred McDowell, with atmospheric easy slide and a tasty topping of harmonica –‘Before We Wake Up’ is also the single from the album. Then Eddie brings ‘Home’, all about the life of a travelling musician on the road ‘away from the family, see all the things I want to see’ Everything but home, a song which has that Mississippi John Hurt feel . The song is unplifting, the guitar bright and breezy. ‘Breakeven Blues’, delivers some superb finger picked guitar, and is an outstanding song. Then there’s ‘Skylight’, surely one of the finest songs he’s ever written; atmospheric guitar, atouch of lap steel and the beauty of Xavi’s cello, making this such a beautiful track.

The, ‘I Long For A Sail’,has that low down, dirty, heavy electric guitar straight out of Oxford Mississippi hill country blues. Add stomp board backing vocals and deep slide for a real blues delight. On to the ‘Birdcage Blues’, if you’ve seen him live you know just how Eddie plays these solo blues, well here’s another to enjoy. ‘River Blues’ follows, so go take your guitar and harmonica, sit by the river, and sing an easy, well-cradted blues song. ‘Falling’ is the perfect song to follow, with twin guitars and again that warm glow of his son Xavi on cello. ‘Kitchen Boogie’, is a harp/guitar piece, the type of tune where Eddie excells, and ‘Lazy Sunday’,has thaat warm sound of Hawaii all over it, laid back non the sand with waves flowing over you with a touch of piano behind !

The only cover on this album is a very well constructed instrumental version of ‘Amazing Grace’, the art of guitar by a master craftsman. Then we’re treated to two bonus tracks, one ‘Too Much Choice’ – all about too much choice on radio, ‘but where is the blues’ – and finally, a finger picked country blues instrumental ,’Country Walk’. This album was recorded during lockdown and is not to be missed. He has never sounded better on an outstanding release. To bring Xavi in on cello was a masterstroke; the first time I’ve heard a cello on the blues, but hopefully not the last.

This is a wonderful album, Eddie Martin on incredible form !

There was a time, not so very long ago, when certain parts of the music industry looked upon “one-man bands” as something of a joke. Thankfully guys like Mike Whellans blew that idea out of the water. Also recording and performance techniques have allowed many, if not all artists, to layer different sounds together blurring the lines of what is possible for one person to create and perform. I realise that I am in part preaching to the converted but sometimes you must put things in context. So, it is with this new release by long time blues aficionado Eddie Martin. He is a guy who has been on the fringes of my knowledge for a long time, but this is the first album of his I have ever received, and it is very good. As with countless other musicians the Covid pandemic has been a double-edged sword of no gigs but plenty of time to write and be creative at home. So, except for a cello, played by his son, on three tracks everything else is “one man band” on all fourteen tracks. Thirteen are originals plus a haunting instrumental Amazing Grace as the single cover. The songs drip with fine Blues ideas rooted in the legends and styles of McDowell, Patton, House and others. Resonator guitar and harmonica marry lyrics drawing on many events and experiences from 2020/1. Lazy Sunday with Hawaiian overtones is a perfect example of sun-drenched Blues whilst Happy, Broke And Free sums up the plight of many artists thanks to Covid. If you like your Blues as simple back porch, or street corner straightforward in style, then this is right up your alley. Explore and enjoy at your leisure.