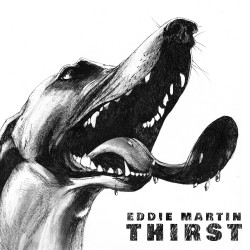 In its first week THIRST was already “Best Album of the Week” on 2 US/UK radio stations. DJ’s Dennis Roberts and Steve Hoare on “Damn I spilled the Blues” and “The Blues lounge” radio programmes, kindly called it “Superb” and  “an album full of depth, colour and damn good songs”

It then went on to achieve many “best album of the year” postings across the music world.

Reviewed in the United Kingdom on 18 December 2019

From the cool little guitar and harmonica unison riff that introduces and frames, ‘One Man Band’ (a mid-tempo boogie driven by a simple beat) it’s clear that Eddie Martin is heading for another winner with Thirst, his twelfth studio album.

‘One Man Band’ could also be part-autobiographical (Eddie Martin is the UK’s finest solo blues performer; in 2018 he picked up the European Blues Award for Best Solo Artist) but the song is actually about Martin’s favourite one man band musician, Memphis’s Richard Johnston.

It also comes with the not-so-one-man-band twist of being accompanied by drummer Tom Gilkes, bassist Jerry Soffe and backing singers Audra Nishita & Nadine Gingell, all of whom feature throughout Thirst.

But one song does not an album make and luckily – or, rather, unsurprisingly, given Eddie Martin’s songwriting pedigree (200 published songs thus far) – Mr Martin has another ten worthy of our attention.

Lyrically, too, Eddie Martin runs the gamut, from the humour of bar-room piano (courtesy of Yuki Yoshizu) and slide blues number ‘Sewn Up’ (“If nip and tuck doesn’t change our luck, we get some more if we’ve got the bucks”) to the thoroughly thought provoking, as heard on the slower and rootsier ‘Free Man Blues.’

The latter, a homeless war-vet’s take on Freedom (“you know that freedoms deep, it’s not just a simple treat;
it talks of others that you might not meet, who had theirs stolen in their sleep”) features some subtle but highly impacting Hammond organ from Jonny Henderson, who also lays some tasty B3 tones down on the decidedly funky ‘Searching For Home.’

Another slow number, the eight minute ‘Like Water’ (featuring an acoustic 12-string intro in intentional homage to Keith Richards on ‘Wild Horses’) is akin to Paul Rodgers in his deepest, subtlety expressed blues form (indeed there’s a touch of Rodgers in Eddie Martin’s phrasing here).
The song also benefits from the organ and Fender Rhodes contributions of Jonny Henderson and Dan Moore, as well as a delightfully crying solo from Eddie Martin.
That Martin’s solo is expressive but not overly long is a fine example of the musician’s less is more / only what the song needs musical mantra.

Even more impacting is ‘Imagine Us From the Sky,’ a slowly building slide, guitar and Hammond number that conjures classic era Allman Brothers sonic imagery.
If Joe Bonamassa (albeit with, no doubt, a bigger soundscape) had written or recorded this ‘un it would be hailed as JoBo’s latest epic.

Such longer or emotive numbers are tempered and complemented by the shorter and sharp slide blues fun of ‘Run River Run,’ the up-tempo shuffle of the humorous ‘Silver Spoon’ and the Bo Diddley-esque and slide squealin’ ‘Louisiana Woman’ (lyrically a tribute to the Queen of Gospel, Mahalia Jackson).

The dark, seven minute slow blues rumba ‘Frozen Lake’ (Ry Cooder slide meets Nick Cave’s poetic lyricism) makes for a spacious and intriguing closing remark that’s begging to be used in a yet to be written, eerie TV series set down by the misty Bayou swamplands.

Thirst isn’t just a cracking little album, it’s also well named – it sums up in one word Eddie Martin’s unquenching appetite for writing, recording and performing.
​It also reconfirms Eddie Martin’s drive and determination to continue to get better each time around.
In that regard, job done. Until the next one, probably.