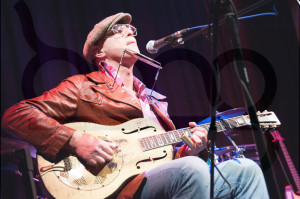 “When I am playing solo I can connect with the audience in the most personal way – lyrics can be heard, and an emotional intimacy is established. But even in a tender song I always feel there is room for percussion and thats where my feet come in. As a one-man-band I love being able to span both realms; the soul-searching reflective singer-songwriter, and the good-time party host..”

He has toured 34 countries in 25 years and in 2018 won the European Blues Award for Solo Artist.

He is considered one of the leading one man bands, using foot and hand percussion –suitcase bass drum, snare, tambourine and shakers – where appropriate to the arrangement of the song, while playing guitar and rack-harmonica.

An acknowledged master of blues guitar and harmonica, he has been studying since the age of 16, and still takes inspiration from new avenues of exploring the great blues heritage.But he writes from his own heart and soul, looking out on his contemporary world with intelligent reflection, rekindling the spirit of classic blues and moving the legacy forward in the most fresh and personal of ways.

He has released 4 solo albums which have all been internationally acclaimed, and has performed solo at major festivals clubs and theatres round the globe and jook joints in Mississippi and Memphis.

“Eddie continues the traditional lineage of British blues players stretching back to Alexis Korner in the late 1950s, [and] manages to play the blues with an unswerving respect to the genre, but at the same time bringing something new and vibrant to the music“. R2

“The most remarkable Blues musician of his generation” Blues in Britain