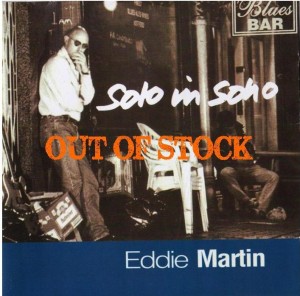 “Easily the best LP this year” TIME OUT

OUT OF STOCK VIA PAYPAL

Release Notes
This is Eddie’s first cd release and the start of Blueblood Records. It was named after his resident gig at “Aint Nuthin But” in Soho, London. He did n’t know that Phil Lynott had released an album with the same title until too late!.

REVIEWS
“Fine British Bluesman, whose excellent recent LP “Solo in Soho” is easily the best this year by the harp-totin one-man-band from Bristol” TIME OUT September 18-25 1996, N0 1361

“A very fine debut cd by a very talented lad. I dont get too excited about many UK musicians, but this guy is definitely the real thing. Enjoyable in all Departments,vocal,material, harp guitar and rhythm“ Blues and Rhythm, Phil Wight, November 1996