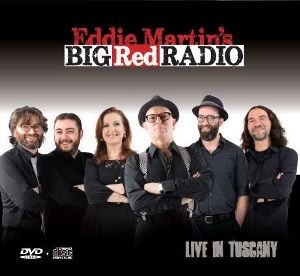 BUY THE CD WITH DVD / VISIT THE DVD PAGE

A unique fusion of country blues and classy, soulful pop. Add to this, sassy song-writing, catchy hooks, strong vocals and the drama of Rock and you begin to get a flavour of Eddie Martin’s new band, BIG RED RADIO. It took Eddie 3 years to find the right musicians to realise the new sound that he had in mind – described by one reviewer as “World Orchestral Blues“.

Formed from top names in the Blues/Jazz/Pop/Rock worlds of the UK and Italy, their debut, sell-out show in a beautiful Theatre in the Medieval walled town of Barga in Tuscany was recorded for this DVD and CD release.

They rehearsed for a week in the theatre. From the first morning of rehearsals, it was clear something special had been born. The buzz got out around town and locals gate-crashed for a sneak preview. A high-energy, emotional roller-coaster of a show was the result, with these top-drawer musicians forming a perfect meeting of minds and spirits with Eddie, and captured in this fantastic recording.

The soundscape reflects Eddie’s identity as the serious student of Afro-American music growing up in the Classic Brit Rock and Blues era. Often Eddie starts by picking his National Resophonic like Fred McDowell (as in “How Can This Be”) or Robert Balfour (on “Throw Me A Line”) or Blind Willie Johnson (on “Five Things”) as if alone on a porch in Mississippi. But then, with hook lines, crescendos and cathartic highs and lows the band come in and the sound morphs to the dynamism of a rock concert.

The lyrics cover topics from social justice to love, loss and the thrill of sexual attraction. With songs about the refugee crisis and spiralling global inequality, and drawing on musicians from around the world, Martin wanted the album to carry the torch for social harmony and tolerance as brothers and sisters of a common humanity. 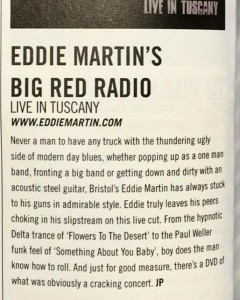 “One of the best blues albums this decade – should be in everyone’s music collection. Inventive, creative, beautifully balanced selection of tracks, and delightfully refreshing. Not to overlook exemplary musicianship.” Roots Around The World Mark Ringwood Jan 15 2016

FOUR STARS ****  “Eddie Martin is one of the more interesting characters and performers on the UK blues scene, equally adept in a one-man-band, folk-blues, electric blues or even a big band blues setting. This set brings all those elements together,.. plenty of excellent slide guitar work and call-and-response vocals. .. Note too that the sound quality is outstanding ”
R2 Norman Darwen Jan/Feb 2016 Issue