Live In The USA 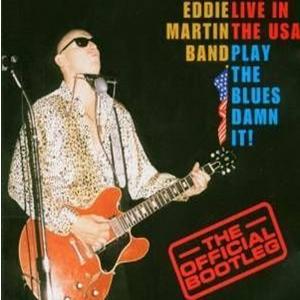 Shows in the famous JJ’s in Dallas/Fort Worth Texas and The Slippery Noodle in Indianapolis as well as other clubs in Texas, Louisiana and Memphis Tennessee get an airing in this high-energy, sometimes raucous snapshot of this tight Brit 3-peice on the “chittlin’ circuit“.

Fort Worth Blues Festival –
“Next up was the Eddie Martin Band from London England. They are a trio with a HUGE sound. In fact I’ve never heard a really good current guitar player who also blows good harp while simultaneously playing lead/rhythm guitar. Most wind up sounding like Bob Dylan. Now I like Bob Dylan, mind you, but he ain’t much of a harp player, let alone a blues harp player..Eddie is though. When Eddie got going you’d have thought there was four or five pieces up there as he doubled his harp and guitar, working very closely with his drummer. Near the end of the set Eddie did one of the funkiest versions of Freddie King’s classic “Hideaway” that I’ve ever heard. I suspect that Freddie would have loved it, a nice job from a man who I hope will be heard from a lot more in the Blues world” SOUTH WEST BLUES.

“Look, Eddie Martin has got it all; the voice, the chops and tons of class! And his band mates, Tony and Mike, are right there with him. Touring in support of their critically acclaimed album “Fire and Floods”, the Eddie Martin Band gave one of the finest blues performances of the year. This was “the blues” the way it was meant to be, right from the heart and soul. Eddie Martin is a one-of-a-kind original! Eddie Martin is a blues Master!” TWO RIVER TIMES, NEW JERSEY.