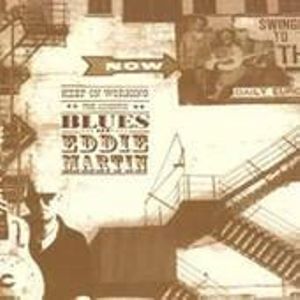 Keynote Review
10/10 “Keep on Working has Martin paying homage to past and present bluesmen such as Barbecue Bob, Dr Ross, Robert Johnson and Paul Rishell. This is no covers album though, 11 of the 15 tracks being originals. Martin conjures up the sound and feel of traditional blues from his vast repertoire of blues styles, ably abetted by some unfussy and unobtrusive production and his National Steel Guitar, Old Goldie, leaving a raw edge and authenticity that will be the envy of many who have done their acoustic thing (a certain Mr Clapton for one). If it wasn’t for the fact that covers were so well known – songs such as “It Hurts Me Too” and “Bundle Up and Go” -then it would be hard to pick them out. The likes of Keb Mo and Eric Bibb have shown that there is market and audience for top quality original acoustic blues, buy this CD and see why Eddie Martin should be receiving much wider recognition for his work“. BLUES IN BRITAIN 2001