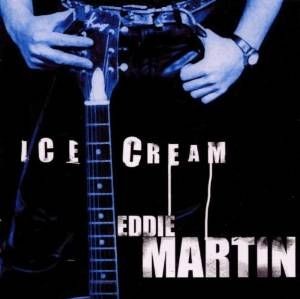 Release Notes
This is the best-selling album of Eddie’s back catalogue. Top UK saxophonist Andy Sheppard makes a guest appearance on “Love is Like a River” . The soundscape takes in swampy blues rock as in the title track, soulful blues on the Andy Sheppard Guest track, and the up-tempo live show crowd-pleaser “Cherry Red”. The closer is a sweet smoky ballad called “Lazy Monday” which Eddie plays solo on acoustic guitar.

Reviews
4 STARS EXCELLENT“Sparse, and just plain menacing at times. The ghosts of Albert Collins and SRV haunt the playin gof a British blues Man who sounds like he means it” Julian Piper Guitarist Magazine

“We’ve said it before, and we’ll say it again – this guy is brimming with talent”  Juke Blues

“his best yet, and if there’s a better British blues album this year, I’ve yet to hear it ” Stephen Foster, BBC Radio. December 2003,

“‘Lets Move it On’ is the opener – a modern day blues-rock classic. It showcases Martin’s stunning slide guitar-work and the maturity of his song-writing.

With his top Chicagoan rhythm section, the album boasts intense electric blues that stands shoulder-to-shoulder with the best of Buddy Guy. In that vein is the slow-burn screamer ‘Put the Brakes On’. The arrangement takes you to the tropics before dropping you in the plunge pool, perfectly matching the angst of the songs lyrics.

Next up is the album’s title track, ‘Ice Cream’, a dark, sexy shuffle which takes us to the swamps of Mississippi. This, and the soulful ballad ‘Love is Like A River’ (featuring Andy Sheppard on soprano), show the tough and tender sides of Martin as a composer and performer. These tracks are likely to be the big radio hits of the album.

The album then takes us on a roller-coaster ride of pedigree blues song-writing from old-time country blues ‘Blues Took Me By the Hand’ to rocking party shuffles ‘Cherry Red’ and modern funk blues ‘Keep It Natural‘.” Amazon.