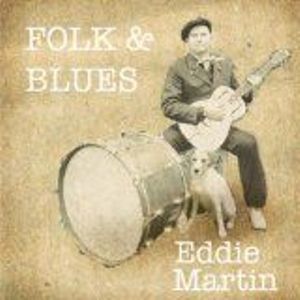 “an all-acoustic exploration of the Delta Blues and the British folk and blues revival … There’s great musicianship in evidence.. that stands equally with the likes of Jansch, Davey Graham, John Renbourn and even John Martyn“

“Folk and Blues” – a rootsy mix of original songs and instrumentals with pure acoustic arrangements. His 11th album features a slew of tunes stripped down to their essence, shining the spotlight on a Londoner’s transatlantic touring experiences and musical development, which combines Delta-hardened slide with pretty finger-picking dexterity in the Jansch-Graham tradition.

Alone in the studio with his engineer son, the album was recorded live with no overdubs in just three days. This, not-to-mention the fact that Martin wrote and played everything, produced and even did the artwork, begins to account for the honest, personal nature of the album. All this combines to draw the listener in to a simple, yet emotionally powerful musical landscape, upon which his blues and folk-fuelled narratives and tunes are painted.

The album also captures the engaging vitality and humour of his one-man-band live shows, especially in the whooping solo harmonica piece. It features 12 original compositions including 3 instrumentals which spotlight the master musicianship that saw him nominated in both the Best Guitarist and Best Harmonica Player categories in this year’s British Blues Awards.

**** FOUR STARS “Eddie Martin is a truly blistering electric guitar player who blows a mean harp and scrapes a mean slide. But this latest collection of 12 original tracks, played entirely by Martin and recorded in 3 days, with no overdubs, is an all-acoustic exploration of the proud traditions of the Delta Blues and the British folk and blues revival equally in mind. There’s great musicianship in evidence and it does n’t overpower the hard-bitten songwriting either. With liberal doses of powerhouse resonator finger-picking and ragtime-tinged, open-tuned instrumental flash, there are moments that stand equally with the likes of Jansch, Davey Graham, John Renbourn and even John Martyn. and mention should be made of Martins’ unforced voice that, with its lonely almost ghostly quality, carries the narrative-based tunes with ease”GUITARIST MAGAZINE

.
“Folk and Blues” tells it like it is..The superb recording catches all the tones of the instruments and every nuance of Eddie’s expressive vocals. Good lyrics too!.The flow from track to track is effortless helping make this Eddie’s most satisfying solo CD to date” fROOTS

“Eddie Martin is one of the UKs best. .he’s equally adept at fronting his powerful blues trio or going it alone, attacking a song acoustically like few can – with his phenomenal guitar playing, his skill with a rack harp, & his inimitable foot rhythm. Solo & acoustic or loud & electric, Martin’s a master of both. . he’s also gifted with a truly expressive voice -His harp skills, similarly, are formidable .. Yet it’s Martin’s ability to coin a phrase & construct a song around the lyric that also distinguishes him from the pack. A spellbinding storyteller, ..His greatest skill however, is his slide playing.. Surely his time has come“. PENGUIN EGGS, Canada