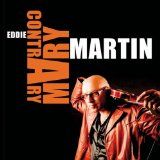 “Martin has without a doubt to be ranked up among the top half dozen UK blues players around. ”

Release Notes
A blues-rock tour de force, this album was rave-reviewed in the international guitar press. Eddie’s electric slide work is particularly to the fore on an album which has fewer 12 bar blues than any other in his catalogue. Think intelligent biker-blues-rock. This is Eddie’s most played album on American Rock radio stations. It was produced by Josh “JJ” Macrae whose production, co-production and engineering credits include Foo Fighters, Dave Bowie and Queen.

“Martin has without a doubt to be ranked up among the top half dozen UK bluesplayers around. His fans will be lining up to hand over their money for this set” Blues and Rhythm

9/10 “There’s more straight ahead rock on this CD than Ive heard on any of his other albums..but an intelligent work, for all its brawn” Paul Lewis Blues in Britain