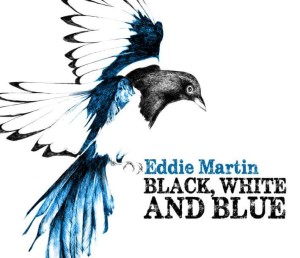 Only here can you order a personally signed copy by Eddie 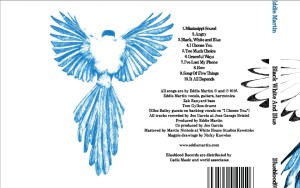 With such a strong crop of upcoming or becoming established British singer-guitarists currently plying their blues and blues rock trade across the UK (the recent spike-in-the-charts rise of Joanne Shaw Taylor, the talents of young six-string slingers Laurence Jones, Ben Poole and Chantel McGregor, to name but four) it’s worth reminding ourselves the currently buoyant scene has been built on the strengths of those at the top of their game twelve, fifteen and twenty or more years on from making their own impact on the circuit.
​
Matt Schofield, Danny Bryant and Aynsley Lister are three of many such talented cases in point.Adding to that list of ever-presents these last twenty years or so, with product as tasty as anything they have done those last two decades, is Eddie Martin and Black White and Blue – and given this is British bluesman’s fifteenth offering of a catalogue that ranges from accomplished and acclaimed blues rock, big band albums, a handful of acoustic works (including 2010’s Folk & Blues) and a couple of live DVD’s, that’s quite the statement.But then Black White and Blue makes its own statement, and right from the get-go, with the perfectly titled opener ‘Mississippi Sound’ and the howlin’ harmonica that echoes behind and through the ZZ Top ‘n’ slide guitar picking number (Eddie Martin plays a blues harp as well as he plays a blues slide – and that’s very well indeed).

“Marking a welcome return for this Londoner, one time christened “The Ambassador of British Blues”, is his high-energy “Black white and blue” album, full of vibe and groove.

Eddie Martin could be considered the MacGyver of British Blues as his talents are multiple and varied. He combines the capacities of singer-songwriter, producer and arranger, inspired and talented guitarist and harmonica-player, and has evolved to perform solo, in a trio or even within a big band, and is equally happy on electric or acoustic. Without ever making concessions to his music or his passion, this guy lives, breathes and thinks the Blues.

This latest album marks a new stage in an already rich career and, with his power trio, Eddie offers us a succession of 10 exciting titles. The magical and bewitching music is vibrant and regal, intelligent lyrics sometimes ironic sometimes interrogative but always relevant, and all the time alternating between blues-rock, swing and jazzy scat played perfectly on the harmonica, the Telecaster or on slide over a groove carpet provided by the excellent Tom Gilkes (drums) and Zak Ranyard (bass); a monstrous rhythm section.

Eddie Martin offers us a wonderful blues record; modern, stripped-down, but high- octane and full of freshness. This is a red-hot album that I recommend to you urgently.” Tonton Erick Blues &Co n°79, March 2017

“Black, White and Blue’, his excellent 15th album ..should finally bring him long overdue recognition as a bluesman of real substance. It boasts consistent strong songs, lyrical depth and occasional ethereal moments, realized by his own multi- instrumental ability and a versatile rhythm section comprising bassist Zak Ranyard and drummer Tom Gilkes.He is totally convincing as a blues artist who uses a traditional blues format in a contemporary way…it’s the work of an experienced player who can change the mood of a song with a single phrase or different tone.

Class..The album manages to be both traditional and modern without compromising either in any way. It perfectly showcases all Eddie’s proven talent in a ten-track package and on each track he offers something fresh and original. It’s just out now and you need to get a copy….Peter Elliott Man in the Hat Reviews

Brilliant..9/10..Called the “Ambassador of British Blues”, Eddie Martin has been keeping it real for 30 years. This is his 16th release too, and he is in tremendous form throughout. 2016 has been a wonderful year for the blues. Here’s another album to add to that collection  Make an appointment with the ambassador at your earliest convenience. Maximum Volume

What a joy..rich with intelligent writing…Martin plays lead guitar like the greats, but his multi-instrumental virtuosity means he is also able to push boundaries and deliver the unexpected..an album which feels fresh and alive with energy…An impressive display of blues-rock virtuosity, Entertaining lyrical commentaries,Great riffs, rhythm and solos, Rating 9/10  Will2listen

Excellent songwriting, Humorous, clever,versatile…Eddie Martin’s recent album “Black White and Blue ” is a varied blues rock album with recognizable Delta blues influences and harmonica which demands attention. The blues riffs in the songs work really well and the songwriting is excellent. This British trio will not only delight blues rockers, but also those who love an artist who continues to surprise.Rootstime

“A classic album..by one of the finest blues artists there is!” Blues in Britain December Issue No 180

“Singer, guitarist and harmonica player Eddie Martin is one of the British blues scene’s most interesting characters, with a wide range of experience; he can plays everything from the solo Mississippi blues to full, brassy Rhythm and blues and make it all convincing. .Eddie goes for a completely individual and original approach, writing all 10 songs himself, and referring not only to the musical styles but also the attitudes and opinions of the time – contrasting them to today’s greed and selfish politics. . whilst Elles Bailey adds an excellent backing vocal to the soul-inflected ‘I Choose You’. Fans of vintage Fleetwood Mac should also try to listen to ‘Graceful Ways’. This release is a very fine contemporary take on the classic UK blues sound, which should appeal both to lovers of modern blues and followers of classic blues-rock.” Norman Darwen “Twoj Blues” Poland Jan 3 2017

“British bluesman Eddie Martin makes excellent albums and “Black White and Blue” is another ..a power-trio tribute to the late 60s British blues-rock sound. Eddie does not just recreate though and makes the songs contemporary and relevant with some hard-hitting lyrics – though his sense of humour does shine through too!” Blues News No 97, Norway /Sweden December 2016

Many have tried, through the years, to give a real definition of what “Living The Blues” really means. Often, many fans or even music press have labelled the genre as one expressing sadness, loneliness, living tough times or going through rough patches in everyday’s life.

The English Blues Maestro Eddie Martin has got a much more lucid and wider vision of what Blues and being a Bluesman is all about. His brand new album, called Black, White and Blue is a clear statement of how much, in Martin’s eyes, the genre has been, and still is, the motherload for Black Music, Rock &Roll, Jazz, you name it.

Black, White and Blue is an entertaining, exciting, vibrant and irresistible record for many reasons. The album showcases an artist at the highest level of his musical ability in each of the 10 songs present on the record, no matter whether it’s through Martin’s harmonica, his Telecaster Custom or even his Slide Guitar.

Eddie Martin’s songwriting is sharp, ironic at times, even mellow on a couple of songs but it’s strong and written with intelligence and wittiness at the same time. Moreover, his storytelling is definitely miles away from the common stereotypes that expect Blues stories to be linked uniquely to sad aspects of human lives in various forms.

The one-two that open Black, White And Blue is pure dynamite. Mississippi Sound has got that unstoppable foot-stomping tempo typical of the great John Lee Hooker’s style but executed by Martin and his Power Trio spectacularly well, with Martin’s slide guitar sounding like heaven. Same goes for Angry, a tune with a strong rock influence, with Martin’s lyrics as cut-throat (..politicians don’t stand for what it’s right…) as it is his thunderous Stratocaster guitar sound. A true highlight of the album.

The choice of the album title has not been casual for the English artist’s new album. Black, White And Blue are the three colours through which Martin sees the way the Blues has confluenced itself into other music genres through the years and the record’s title-track, through its clever pastiche of blues, rock and hillibilly, is the best way to sonically illustrate Martin’s musical views.

One of the many aspects of Martin’s talent is not just linked to his extraordinary ability as a musician but also to the maturity he has reached as a songwriter. Black, White And Blue is an album that sees an artist and a man sometimes struggling to understand the illogicality of politic or religion, as he so well does in the powerful closing tune of the album, It All Depends but also able to talk about love, as in the case of the splendid, soulful ballad I Choose You.

There are a couple of moments of the album which show a further and more funny angle of Eddie Martin as everyday life’s perfect raconteur. Too Much Choice reflects on the irony of a modern society that offers media platforms to many and meaningless music genres, except the blues. It’s a truly excellent tune, with a great funky feeling coming from a fabulous Rhythm Section made by Tom Gilkes on drums and Zak Ranyard on bass, a Section that sparks like a diamond, musically speaking, not just on this tune but throughout the whole album.

I’ve Lost My Phone is a sublime concentrate of swing, jazz and, most of all, the great intelligence of an artist that knows exactly when to take himself less seriously. The tune is about losing a mobile phone which means, in nowaday’s lifestyle, the end of the world for many individuals. Where Martin’s tone can be ironic in his lyrics, the musical structure of the whole track is first class.

Despite the variety of themes present on the album, there is a definite unity on Black, White And Blue. The Blues is the element that brings all together and the way that Martin balances all the different music tempos, moods and styles, is the work of a very inspired artist.

Eddie Martin is and has been an English National Treasure and Blues/Rock Institution for the last quarter of a century. Through this new record, the 10th studio album of his glorious career so far, Martin definitely chisels his ultimate musical masterpiece to date. Black, White And Blue is his First Class ticket for Blues Worldwide Excellence. Blue Bird Reviews, Gio Pilato Dec 16 2016