Posted by eddiemartinblues on January 9, 2018 Uncategorized | | No comments
This is the full review from Fabricationshq.com
Eddie Martin – Black White and Blue 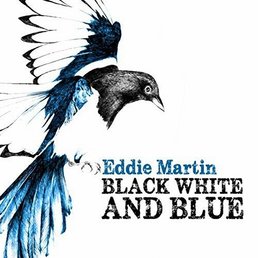 With such a strong crop of upcoming or becoming established British singer-guitarists currently plying their blues and blues rock trade across the UK (the recent spike-in-the-charts rise of Joanne Shaw Taylor, the talents of young six-string slingers Laurence Jones, Ben Poole and Chantel McGregor, to name but four) it’s worth reminding ourselves the currently buoyant scene has been built on the strengths of those at the top of their game twelve, fifteen and twenty or more years on from making their own impact on the circuit.
​
Matt Schofield, Danny Bryant and Aynsley Lister are three of many such talented cases in point.

Adding to that list of ever-presents these last twenty years or so, with product as tasty as anything they have done those last two decades, is Eddie Martin and Black White and Blue – and given this is British bluesman’s fifteenth offering of a catalogue that ranges from accomplished and acclaimed blues rock, big band albums, a handful of acoustic works (including 2010’s Folk & Blues) and a couple of live DVD’s, that’s quite the statement.

But then Black White and Blue makes its own statement, and right from the get-go, with the perfectly titled opener ‘Mississippi Sound’ and the howlin’ harmonica that echoes behind and through the ZZ Top ‘n’ slide guitar picking number (Eddie Martin plays a blues harp as well as he plays a blues slide – and that’s very well indeed).

Got something to say?